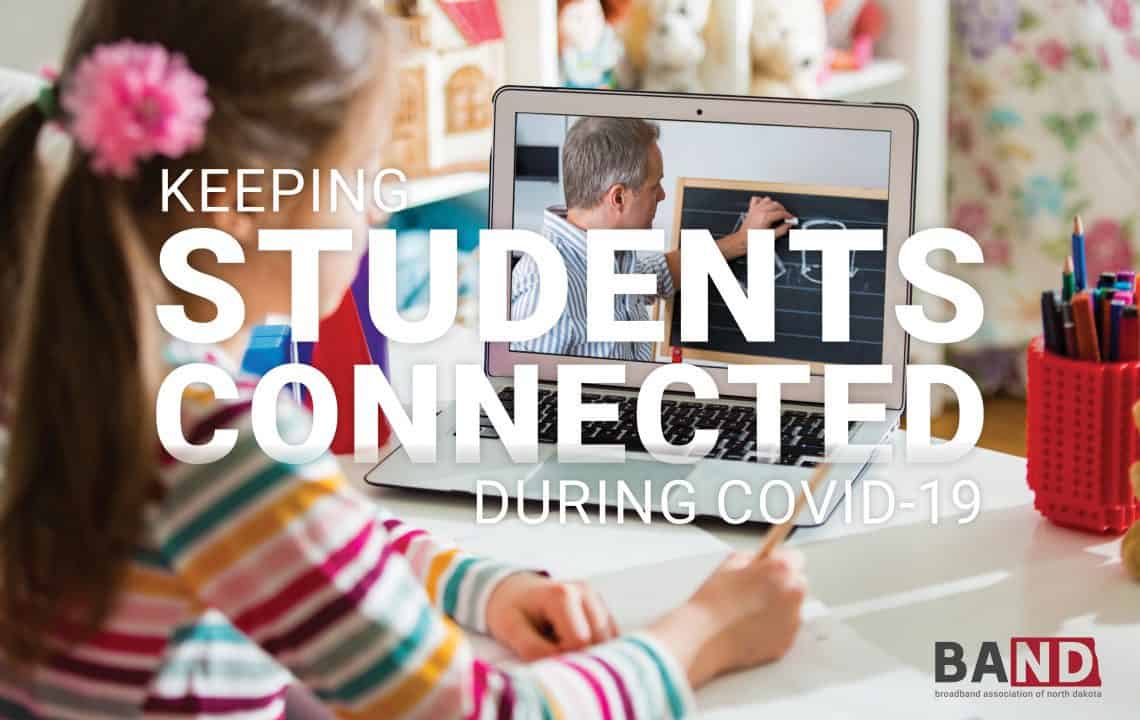 How BAND and DCN guaranteed broadband access for 99.8 percent of North Dakota students during the pandemic

It was still early in the COVID-19 pandemic when Governor Doug Burgum and Superintendent of Public Instruction Kirsten Baesler called the first press conference.

As of that Friday, March 13th, North Dakota only had one confirmed case of the novel coronavirus. Baesler and Burgum announced that schools would remain open, and provided administrators with guidelines to make the best decisions for their individual districts.

But the situation progressed dramatically over the weekend, and on Sunday, Governor Burgum ordered schools to close for the week. Teaching staff entered their schools for what would be the last time of the year to plan for remote learning—just in case. And on Thursday afternoon, the Executive Order was made: all North Dakota school buildings would be closed to students, indefinitely. 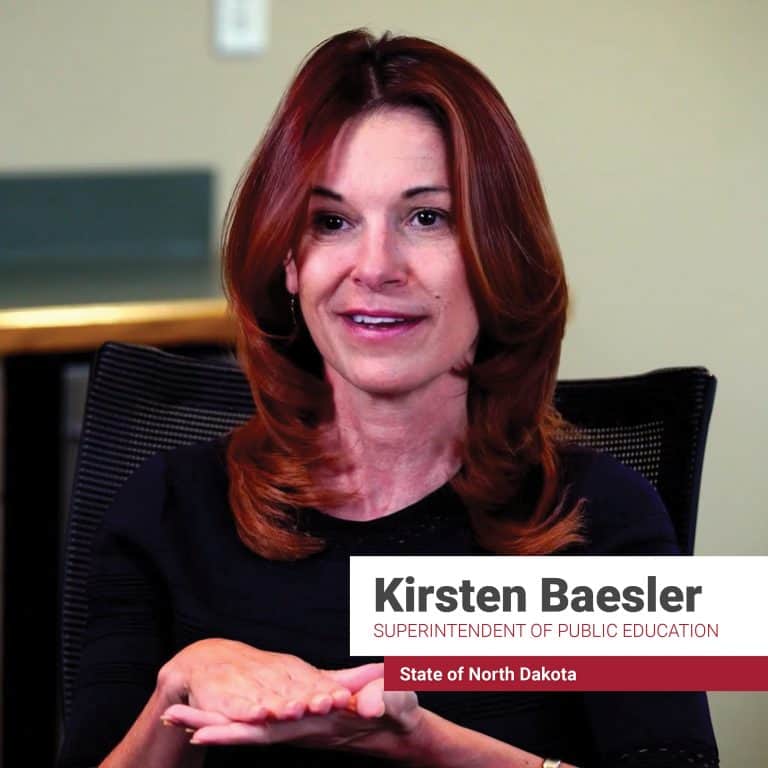 “Thus began the saga of, how do we ensure that our students don’t stop learning just because our school buildings are closed?” said Superintendent Baesler.

The Executive Order issued by Governor Burgum that day included a stipulation that in order for schools to receive funding, they must submit a distance learning plan to be approved by the Department of Public Instruction.

“In those plans, we saw a heavy emphasis on technology—not only the platforms of communication between teachers and students, but also the delivery of actual learning mechanisms of math, reading, and writing lessons,” Superintendent Baesler said. “And that led us to be a little bit concerned about whether our students were going to be connected, whether they would have access to that technology.”

In March 2020, school districts across the country were faced with the same question. Teachers scrambled to make plans to continue providing meaningful instruction for the remainder of the school year. News reports showed images of students gathered, six feet apart, in their schools’ parking lots just so they could access the Internet to complete their assignments.

But amidst the chaos, one unexpected state was able to transition to distance learning almost seamlessly. More than 99 percent of North Dakota students, over 120,000, were connected to the internet in a matter of days—all thanks to a spirit of collaboration, an investment in broadband infrastructure, and the legendary North Dakota work ethic. 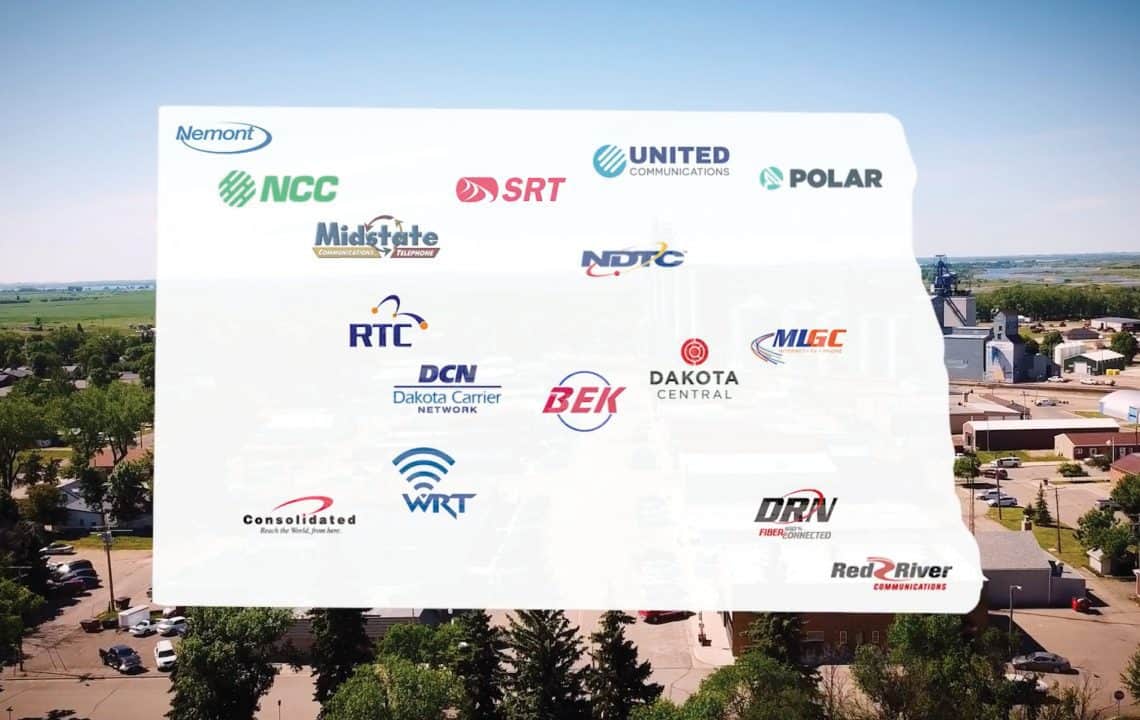 “It is absolutely essential for our students to have broadband access because the world is so big right now and they are so connected to it,” Superintendent Baesler said. “They can’t take a field trip to China, or to the oil fields of Saudi Arabia, but things happening in those countries are impacting their daily lives. So it’s important that they learn about them as they become global citizens, and that is only possible through the Internet.” 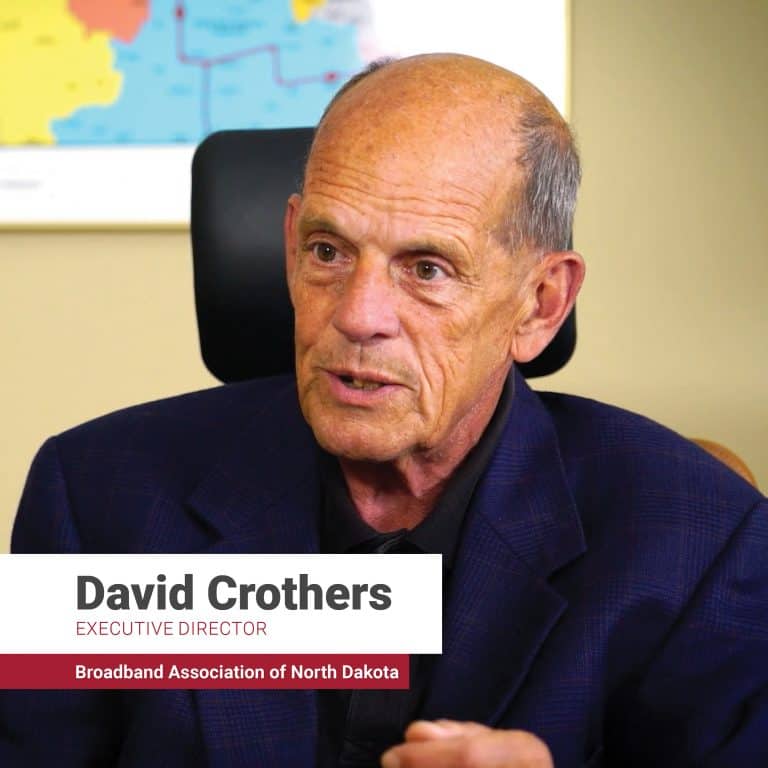 The Internet became even more critical for schools during the COVID-19 pandemic. Suddenly, it was teachers’ only form of communication with students. And because social distancing plays such a vital role in preventing the spread of the virus, it also became a means of keeping teachers, students, and their families safe.

In order to ensure that all North Dakota students could participate in online school during the pandemic, districts first needed to understand where the need for Internet access lay. Working with local broadband providers and the North Dakota Information Technology department, Baesler’s team learned that student addresses were not protected information and could therefore be used to determine whether or not they had access to broadband. By overlaying student addresses with broadband customer addresses, they learned that a majority of students, approximately 70 percent, already had robust broadband access within their homes.

Next, it was a matter of delivering broadband to that last 30 percent—and quickly. Realizing the importance of keeping students connected during the pandemic, the 15 rural broadband providers that form the Broadband Association of North Dakota (BAND) went to work immediately.

“Virtually all of the areas had fiber running by those home addresses,” said David Crothers, Executive Director of BAND. “It was just a matter of getting the equipment in the door and hooked up for those students in unconnected homes. So we were able to do that very, very quickly. And that’s how we ended up with over 2,100 students online who otherwise wouldn’t have been able to participate in their education.”

Almost 25 years ago, the member companies that form BAND joined together to create the Dakota Carrier Network (DCN) in order to invest in a fiber backbone that spans the entire state. Those companies knew that they could get farther together, and so far, they have laid more than 42,000 miles of fiber across the state of North Dakota.

Because of that existing fiber infrastructure, a process that normally would have taken months was completed in just days. When the pandemic hit, North Dakota schools did not need to build a new system to get broadband to students; instead, they were able to dedicate their energy to deploying a system that was already in place.

“We had that infrastructure, that symbiotic relationship before COVID-19 ever hit. And so we were able to join up as one and funnel all this traffic onto that network,” Crothers said. “We were fully prepared to go, but that’s a debt of gratitude that we owe to the directors and management of these local companies that were doing it a quarter of a century ago. And it’s worked out just perfectly for us and the people in North Dakota.” 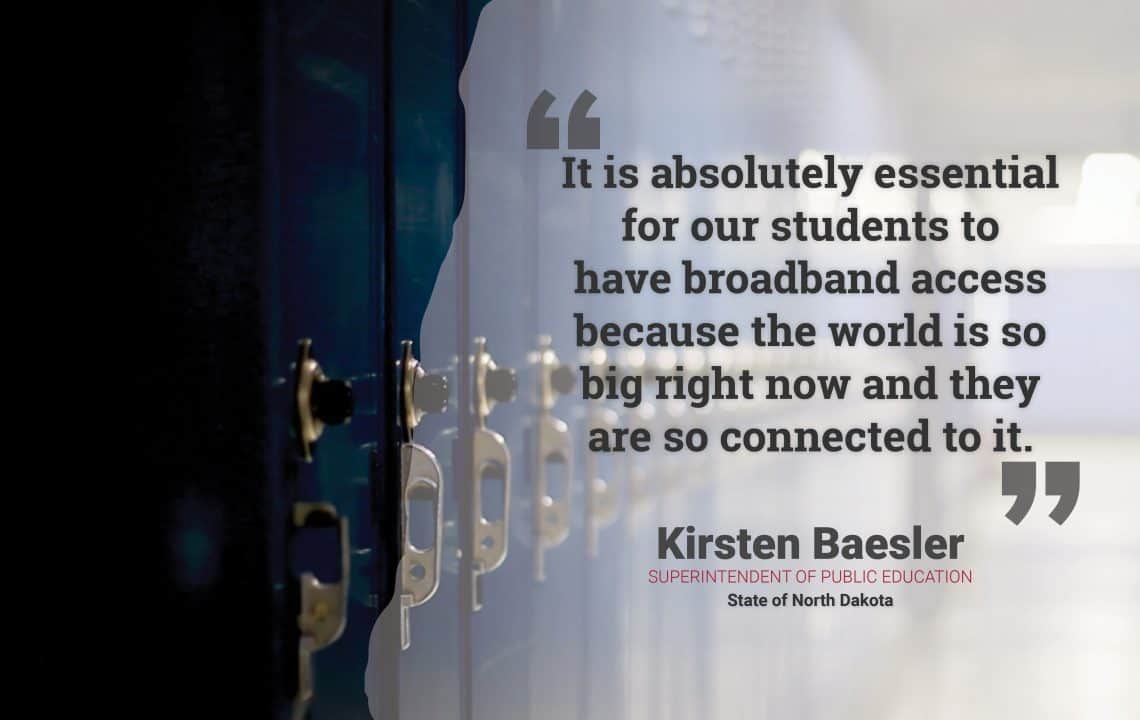 A Heritage of Innovation

In just three weeks, 99.8 percent of students in territories served by BAND member companies were connected to the Internet and able to continue with their school year—a number virtually unheard of across the country.

When colleagues from around the country ask Superintendent Baesler how North Dakota managed to connect so many students, so quickly, she looks back to our state’s heritage. When pioneers first settled in North Dakota, living few and far between, they needed electricity to survive. They didn’t wait for a large electrical company from across the country to provide them with electricity; they banded together, formed cooperatives, and did it for themselves. The same can be said for telephone lines, and today, broadband.

“They brought that communication to our farmers and ranchers across the state. I think that is the heritage that has brought us to 99.8 connectivity,” Superintendent Baesler said. “That’s the partnership that we have with BAND and their member companies. They don’t wait around for someone else to solve problems for their customers, for their members. And for most importantly, they solve that problem before the problem even really gets bad.”

By working together and drawing on this pioneering spirit of North Dakotans past, the 15 member companies that form the Broadband Association of North Dakota, Dakota Carrier Network, and school districts across the state set an example of the possibilities of distance learning. Most importantly, they proved that no student should fall behind in school due to lack of Internet access—even in the midst of a pandemic.

“COVID-19 has created a dramatic illustration of the importance of having a reliable, affordable, excellent broadband connection, anywhere that you live in the state of North Dakota,” Crothers said. “It’s really brought to bear how important a functional state-of-the-art broadband network is, not just for those who can afford it, not just for those in the largest cities, but to every resident.” 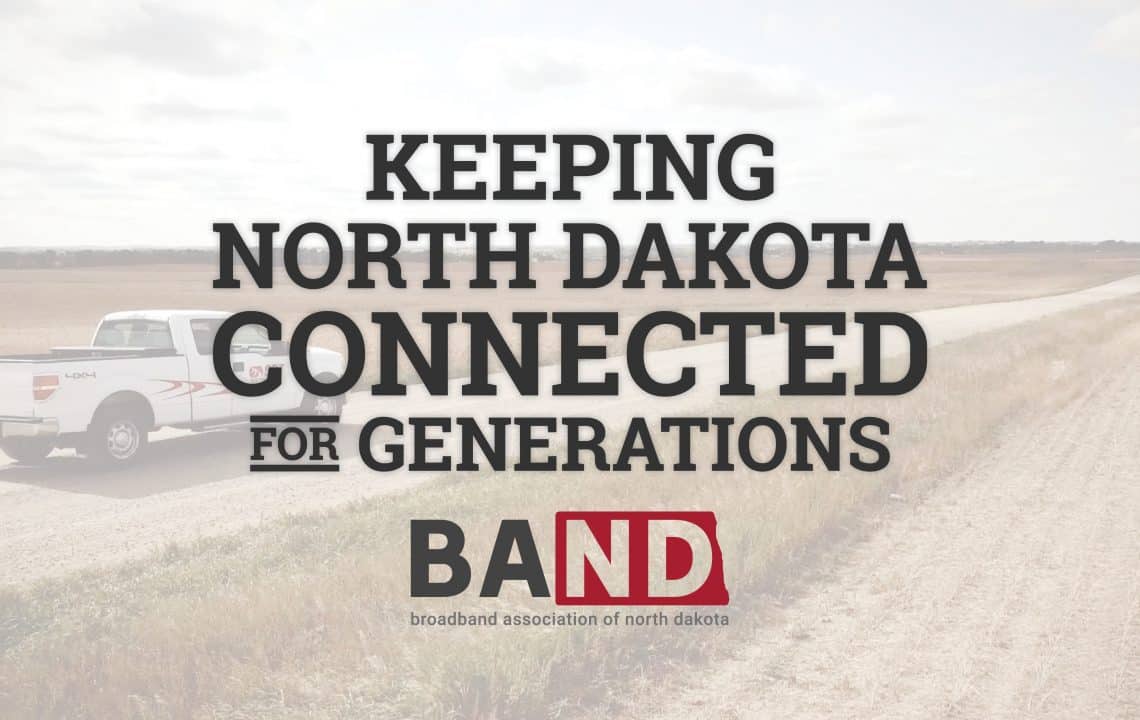 PrevPreviousPromises Kept, Even In A Pandemic
NextSHOP LOCAL THIS HOLIDAY SEASON ON SMALL BUSINESS SATURDAYNext