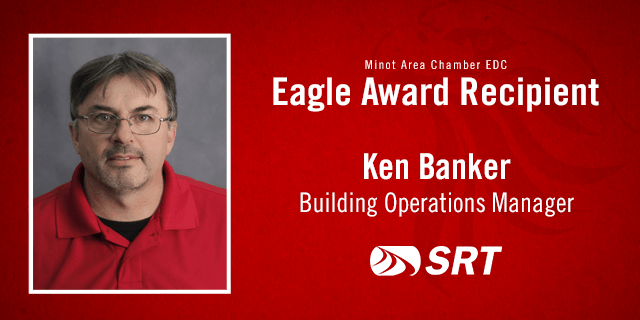 SRT Building Operations Manager Ken Banker received Minot Chamber EDC‘s Eagle Award in July. The Eagle Award recognizes excellence in customer service, and the recipient must be nominated to receive this award.
Ken was nominated by SRT customer Rodney, who said, “On Thursday June 3, 2021, I stopped at SRT on business. I noticed that the American flag on the pole in front of the building was caught up and tangled in the slide sleeve for the lanyard and could not fly in the wind. I mentioned it to the receptionist and asked for it to be passed on to maintenance and said, as a veteran, I was concerned about this. Within a few short minutes, I saw someone come out and look up at the flag. He retrieved the crank to lower the flag to correct the problem as I watched. He mentioned it appeared the flag was damaged. He removed the flag from service as a sign of respect in not flying a damaged flag. I thanked him for his action. I neglected to ask him his name. I later learned his name after a friend suggested the Eagle Award. I agree about the award, deserving to a man who is a veteran and respects the American flag. Thank you again Mr. Ken Banker for your action. It is good to see a new flag flying at SRT. You are a great representative of the company and the maintenance department.”
Congratulations Ken, and thank you for taking great care of our building and grounds!
PrevPreviousThank You Healthcare Heros!
NextSRT Holds End of Summer Facebook GiveawayNext